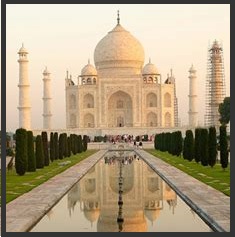 Some types of Indian music are structured the same way as a guitar solo over a chord progression. There are similarities between traditional sitar music and modern rock guitar. (Search “Hindustani slide guitar.”) Ear-trained, string-bending lead guitarists can follow many melodies on sitar. Some of Ravi Shankar’s melodies have a definite rock sensibility. Every advanced lead guitar player should check out the melodies of Ravi Shankar.

Indian music relies on complex rhythm patterns. There’s a formalized method of counting rhythms on your hands which they call ”keeping the tala.” Listeners follow the music with a system of silent, rhythmic hand-clap motions, alternating from palm-up to palm-down to mark specific divisions of time. It’s very involved, and takes practice to learn. It isn’t like line-dancing or “doing the Macarena.” You don’t just figure it out as you go along.

As he plays tabla, Indian master percussionist Zakir Hussain’s face changes expression, as if he’s in an animated discussion of his spontaneous musical choices. The other musicians and many in the audience are counting with him, hanging on his every note. The expressions of those in the audience change simultaneously from nodding agreement to momentary surprise. Seeing this gives you a sense of the deep connection Indian music creates with its audiences. It’s rare for Western audiences to follow music as closely. You also can’t help but notice the joyous, playful expressions of Indian musicians in contrast with the often dour, serious demeanor of Western classical musicians.

Indian Raga and Slide Guitar Lesson – Dan Toppo demonstrates some of the slide sounds used by Derek Truck, including his work with the Allman Brothers Band.

Ravi Shankar in conversation with Paco de Lucia – There are also some interesting observations in the description and comments.

Shankar: Improvisation On The Theme Of “Rokudan” [East Greets East] – My favorite Shankar recording of all time.

The Role of Memory in Music