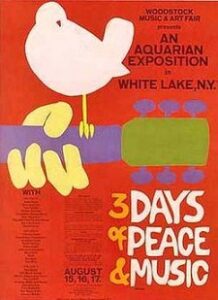 Let’s take a brief look at Woodstock, a half-century later. A lot of younger people don’t know this stuff, and a lot of older people have forgotten. So here’s a little background on the festival which took place in upstate New York on August 15-18, 1969. This information is old, and the sources are scattered, so I’m not going to bother with attributions.

The single most iconic performance at Woodstock, and the performance that defined Woodstock, was Jimi Hendrix’s revolutionary instrumental version of “The Star Spangled Banner.” It occurred at the end of the show, as everyone was leaving. Some of the best performances were Santana’s “Soul Sacrifice,” Jefferson Airplane’s “White Rabbit,” Richie Havens’ “Freedom” (much of it improvised), and Joe Cocker’s cover of the Beatles’ “With A Little Help From My Friends.” The Who, Creedence Clearwater Revival, The Grateful Dead, Janis Joplin, and The Band all turned in good performances.

But the sad fact is that overall, it’s hard to regard Woodstock as an artistic triumph. That’s why I categorize Woodstock as essential rock music History, but not as Essential Listening. You have to look at Woodstock as a snapshot in time. The music business was at a particular place in time. The same thing applies to the bands, the technology, media, etc. The music itself was in a particular, short-lived phase where there was a real appetite with some audiences for free-form, abstract music. Michelle Phillips talked about the tensions between San Francisco bands that were into psychadelic improvisation, and the LA bands signed to major labels, who played what SF musicians regarded as over-produced, light-hearted pop.

Woodstock was a narrowly-avoided human catastrophe. Woodstock is the classic cautionary tale of how events can get out of control because too many people show up. (Altamont, a few months later, got out of control for completely different reasons.) The planning was a disaster. They didn’t have enough fencing up by the time the festival was supposed to start, so they couldn’t control gate-crashers.

A Time magazine article from 2019 says that many people who attended Woodstock never heard any of the music, because the sound system simply wasn’t powerful enough to reach a crowd eight times bigger than expected. Besides, live amplification back then was very primitive, compared to today. In 1969, there were no such things as live mixing consoles, or the kinds of audio snakes and cable boxes we have today. The Time article quotes an attendee at the concert:

… even though she was fairly close to the stage, she missed most of the music, as rain and thunderstorms made life miserable. “It was so oppressive in just physical terms,” she said. “It was a slight incline all the way to the top, and when it got rainy and muddy, everything just slid down. It was just getting more and more compressed and intense.”

There were reportedly electrical cables buried only a few inches in the ground. When it rained, it created a huge amount of mud. People were walking over this barely-buried cable the entire time. If the cable had been exposed, hundreds or even thousands of people could have been electrocuted.

Wavy Gravy wasn’t at Woodstock. The entertainer/peace-activist Hugh Romney, who was managed by Lenny Bruce, started an impromptu security patrol that called itself the “Please Force,” as in “please do this,” or “please don’t do that.” Because he was friends with one of the promoters, Romney was allowed to do stage announcements. Everyone remembers Romney as “Wavy Gravy,” but he wasn’t called “Wavy Gravy” at Woodstock. Romney didn’t assume that name until a few weeks later, over Memorial Day weekend, at the Texas International Pop Festival in Lewisville, outside of Dallas.

Max Yasgur, who allowed his dairy farm to serve as the site of the event, gave a memorable speech to the crowd. Yasgur praised the assembled masses for demonstrating to the world that they could create a peaceful and cooperative gathering (in spite of the relentless chaos.) In spite of that, Yasgur reportedly wasn’t interested when he was approached a year later with the idea of using his farm to host a Woodstock “reunion.”

This type of 3-day pop festival had been happening for a couple of years by the time of Woodstock. In May 1967, there were six bands including Cream, Jimi Hendrix, Move and Pink Floyd at Barbeque 67 in the East Midlands of England. The Monterrey Pop Festival, in June 1967, was Hendrix’s first major US concert. Miami Pop Festival 1 was in May, 1968. Miami Pop Festival 2 was in December the same year. There were the Northern California Folk-Rock Festivals, 1 and 2. The Schaefer Music Festival, held yearly in New York’s Central Park, only seated about 7000 people, but it featured two performers a night for 30 days in June through August, and ran from 1967 to 1976.

Between 1967 and 1969 there were about 30 major rock festivals, ranging from 6000 people, to 400,000 at Woodstock. It was nationwide circuit of rock festivals, featuring many of the same acts. Many of them were playing also festivals in Europe. After Altamont in December 1969, rock festivals all but died out in America. They continued in Europe, but the lineups were different.

It was supposedly the only time that Led Zeppelin and The Doors shared a bill. Neither was at Woodstock, or the Texas Intl Pop Fest. (From InvisibleThemePark: Forgotten Woodstock: Seattle Pop Festival, 1969)

At the Texas festival, the local police chief got on stage, and gave a short speech in appreciation of how well-behaved the crowd was, something like Max Yasgur’s speech at Woodstock. Years after the event, a police officer who was on duty there gave a talk about the concert, where he said basically the same thing. You might get the impression that the hippie-youth movement of the 1960s really was all about peace and love. If only it was that simple. This isn’t about glorifying hippie culture. But it’s interesting to look at these events through a modern lens.

Most of the musicians are gone or retired now, in 2022. Santana still plays the Houston Rodeo every year. Crosby, Stills, Nash & Young are all still around, but they’re not together. A number are still alive and playing, but not one band from Woodstock remains intact today. The Grateful Dead dissolved after the death of Jerry Garcia in 1995, later reforming as The Dead. The Who continued after Keith Moon’s death in 1978. With John Entwhistle’s death in 2002, it no longer felt like The Who.

This isn’t about bemoaning the passing of an era. It’s about looking at a snapshot in time, when CSN, Santana, Credence, Chicago, Led Zeppelin, and others still had long careers ahead of them. Look what they did back then. Then look what they went on to do. It’s also about the names. By the end of the 1960s, these were the people in the music business who mattered most. The musicians who played the late-60s American festival circuit are some of the people I’ll discuss in later posts.

The 2019 Time magazine article closes by saying, “Woodstock was undoubtedly one of the most coveted cultural experiences of the 20th century. But for those kicking themselves for not making the trip — or who weren’t born in time to even have such a regret — it turns out that YouTube in 2019 offers a better listening experience than, for so many concertgoers, actually having been there in 1969.”