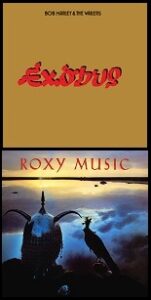 Two of the best-engineered albums of the twentieth century, or of all time, are Exodus from Bob Marley (1977), and Avalon by Roxy Music (1982). Neither ever won awards in the engineering or production categories, but these are two albums that will tell you what your stereo really sounds like.

Besides being both excellent albums, they don’t share much in common. Each album has its own delicious sonic textures. Each album is an artistic triumph. There’s not a wasted second on either one. Both albums are superbly well-arranged. The instrumental work on each is excellent. Both stand up solidly as albums, neither is just a collection of songs. Both deserve to be listened to from beginning to end, without interruption. Both albums have aged amazingly well, and sound as fresh as when they were first released.

Time Magazine called Exodus “the most important album of the century.” A runner up was Kind of Blue from Miles Davis. More on that later.  Exodus sounds particularly good on full-spectrum vinyl. Youtube link:

From BBC.Com, read Bob Marley’s Exodus: An album that defined the 20th Century.

Avalon is etheral, but with a beat. Etheral, but darkly mysterious, not angelic. Deep percussion almost evokes the jungle. Many reviewers use the words “lush,” and “sophisticated.” The synthesizer sounds tell you when the album was recorded. But the tones remain timeless, a model for how to craft fine synthesizer textures. The synths are accentuated by saxophone. YouTube link: