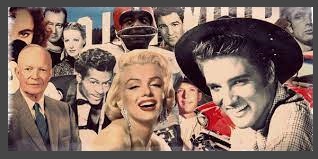 The 1950s is a musically misunderstood decade. Most people think of “golden oldies,” and the birth of rock ‘n’ roll. But there was also a lot happening in jazz, folk, blues, country and Latin music. It was the last decade when nearly all popular recorded music was written out beforehand.

The 1950s was the first decade of 33 RPM long-playing (LP) albums, and 45 RPM singles. Albums sales in the 1950s were dominated by jazz, and artists like Miles Davis, John Coltrane, and Sun Ra.

There was no rock music in 1950. In fact, the first half of the 1950s didn’t sound much different from the 1940s. Billboard’s year-end Number 1 hit song of 1950 was “Goodnight Irene” by Gordon Jenkins & His Orchestra with the Weavers. Jenkins had six songs in the top 30 in 1950. Number 2 in 1950 was “Mona Lisa” by Nat King Cole. “Third Man Theme” by zither star Anton Karas was Number 3. Guy Lombardo’s “Third Man Theme” was Number 7. Bill Snyder’s “Bewitched” came in at Number 24, while Gordon Jenkins’ “Bewitched” came in at Number 26. Frankie Lane’s “The Cry of the Wild Goose” was Number 30.

In 1950, Bing Crosby’s “Dear Hearts and Gentle People” was Number 29. The title is a reference to a scrap of paper found on the body of Stephen C. Foster which read, “Dear friends and gentle hearts.” This goes to show Foster’s lasting influence on American music a century after his death. Versions of the song by Dinah Shore, Gordon McRae and Dennis Day also made it to the Billboard charts in 1949 and 1950.

This was how it looked in the years 1950-1955. Rock music didn’t become popular until the release of “Rock Around The Clock,” recorded in 1954, and made popular by the film Blackboard Jungle in 1955. It wasn’t until 1956 that we had hits by Elvis Presley, Little Richard, The Platters, Fats Domino, Gene Vincent and Jim Lowe. Songs that many people associate with the 50s, like “Duke of Earl” and “Please Mr Postman,” were actually released in the early 1960s.

I’ll talk about Elvis Presley later. These are links to some of the greatest rock hits of the 1950s by artists other than Elvis:

Danny & the Juniors – At The Hop

Sam Cook – You Send Me

Five Satins – In The Still of the Night

Buddy Holly – That’ll Be the Day